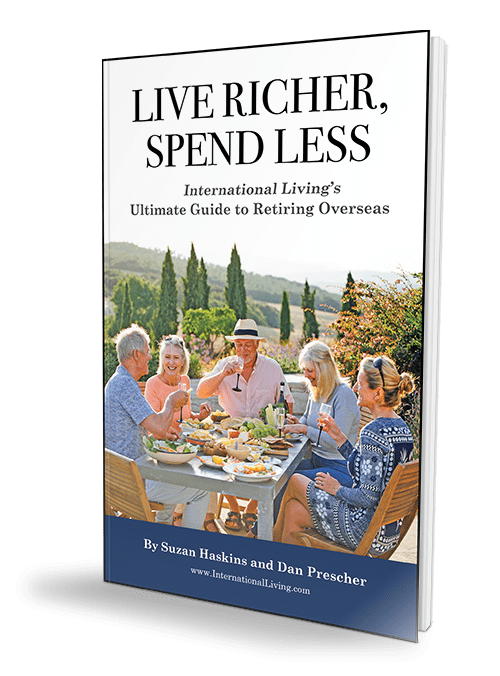 Why retire overseas? The simple answer is because you're likely to enjoy life more…and spend far less—up to five times less in some places—to do that.

In the best retirement destinations overseas where the cost of living is so much lower than it is at home, you can enjoy better weather and scenic views…you could have access to quality healthcare you can afford, a housekeeper and gardener, funds to travel and eat out whenever you want…and true financial stability. No more worries about outspending your retirement income or outlasting your savings.

Authors Suzan Haskins and Dan Prescher are long-time expats. They are experts when it comes to identifying the best strategies and the best locations for a successful move abroad. They first moved overseas in 2001, and since then, they've lived in seven different communities in four different countries. And they've traveled to far more than that.

In the book, you'll gain the practical tools you need to help you see why a life abroad can make so much sense. You'll be able to make rational decisions and understand if the overseas lifestyle is really for you—and if it is, the best way to go about it…to find a good fit, given your interests, priorities, budget, and dreams…

Live Richer, Spend Less serves as your trusty retire overseas guide. Inside you'll learn about and be guided through issues such as…

Suzan and Dan distill their years of experience into a well-researched—and very real-world—resource that helps you understand why retiring overseas makes sense for so many reasons. In addition to enriching your finances, you can improve your health, grow your circle of friends, enjoy new experiences, and create a life you love. 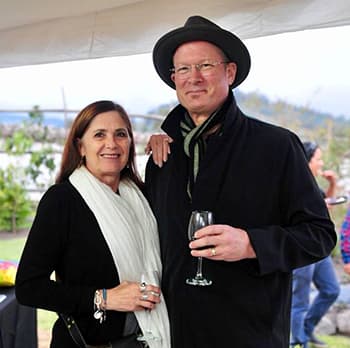 Suzan Haskins hails from the great American Midwest, where she earned a degree in Journalism from the University of Nebraska at Omaha and spent nearly 25 years working in corporate advertising and marketing. Finally, in 2000, she said "not another winter in Omaha" and began looking for a way to live where the climate and scenery were better and lie moved at a slower pace, allowing her to do more of the things she had always wanted to do.

An International Living subscriber, she started pestering the company for a job. In 2001, the company hired Suzan and her husband, Dan Prescher, to write for them at InternationalLiving.com from Quito, Ecuador. From there, they moved to Mexico in late 2002 and in 2006 they moved on to Panama and then Nicaragua before returning to Merida, in Mexico's Yucatan state, where they renovated a colonial home. They also lived for eight years in in Cotacachi, Ecuador. In addition to these locales, they have explored dozens more expat havens around the world, including locations in Brazil, Argentina, Colombia, Belize, Costa Rica, Honduras, Ireland, France, Thailand, and beyond. They are currently residents of Mexico.

Suzan is now Senior Editor for International Living, where she contributes editorial essays and speaks at conferences worldwide on the topic of retiring abroad.

Suzan's husband and co-author, Dan Prescher, is a graduate of the University of Nebraska at Omaha and the University of Iowa with degrees in Journalism and Creative Writing. Also a Senior Editor with International Living, Dan regularly writes about his experiences as an expat living overseas, produces most of the company's podcasts for InternationalLiving.com and serves as master of ceremonies for IL's seminars, conferences, and other events held around the world. He and Suzan have produced in-depth webinars on several of the most popular expat destinations and have been interviewed about living and working overseas for articles appearing in The New York Times, Fortune Magazine, Kiplinger, Reuters, The Wall Street Journal, Forbes, CNN, USA Today, The Business Times, CNBC, The Globe and Mail, Chicago Tribune, MSN, PBS NewsHour, AARP, and more.

At International Living, Our On-the-Ground Experts Show You How to Retire Sooner… Spend Less… Travel More… and Live Better

Since 1979, we've been pointing our readers to the proven strategies and insider tricks that make a good life abroad easily achievable, even without a fat bank account. Each month for four decades, we've delivered International Living (a print magazine) to our subscribers' doorsteps.

Every issue is full of eye-opening ideas you won't find in the mainstream, all designed to help readers—

All over the planet, you'll find hidden gems—spots that rarely, if ever, earn even a passing mention in the popular press. It's not surprising. Almost no publications bother to keep outposts abroad anymore. The quality and scope of international news coverage—and our understanding of and empathy for the world—has suffered for it. But here at International Living, we remain faithful to our network overseas. In fact, rather than shrinking our commitment to on-the-ground coverage abroad, we've grown ours in recent years. We spend more than $850,000 annually to keep "boots on the ground" all over the planet. And we use those boots to tromp around until we uncover real opportunity—for better living, enjoyable adventure, good-value investment, surprising pleasures, and profit, too. We do this because we believe that a life lived richly isn't the prerogative of wealthy gadabouts alone. You needn't be moneyed to enjoy treasures on offer overseas. You simply need to know where to find them. And in the pages of International Living magazine, we show you.

Here's How to Get Yours Hands on a Copy

Everybody says the world is getting smaller. And in terms of being able to travel quickly from one place to another, that's true. New air routes are opening all the time. Exotic island paradises and bustling metropolitan centers—on the other side of the world—are easily accessible. Huge countries—which were off limits only a few years ago—are now open for business as well as travel.

But the opportunities you'll find outside your own borders…well, those are making the world larger than ever. In welcoming corners all over the planet, you'll find big, extraordinary opportunities for better, more affordable living, for profit, for adventure, for fun. You just need to be aware of them.

And this new book, Live Richer, Spend Less—International Living's Ultimate Guide to Retiring Overseas will show you where, how, and why you should take advantage of these opportunities.

Here's How to Get Yours Hands on a Copy…

Just click on the order button below to go to a secure order form. You can review your order before it's final.

Yes, I'd Like to Order a Copy of Live Richer, Spend Less